Saturday didn't finish with the Makers' Market - it was back to the Mart for a very special event - Fleece grading and sorting with Oliver Henry. 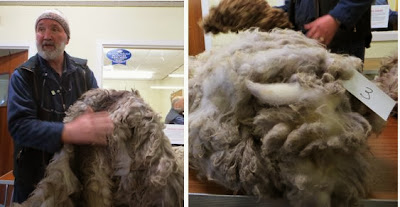 Oliver started off by showing us lower grade fleeces and what many more Shetland fleeces used to look like.  This wool isn't suitable for the fine knitting yarns that Jamieson & Smith produce but it isn't wasted.  It is used in a variety of products including carpets, beds, duvets, throws and the latest product,  numnahs.

Then we saw some of the very fine fleece that some Shetland sheep produce - fine enough for even one-
ply cobweb lace yarn, and an absolute dream for hand spinners.

Here are the two extremes of Shetland wool - you wouldn't think they come from the same breed.  Both though have their uses where their individual properties best match the required function.

Oliver does talks about fleece grading and sorting as a regular event at Shetland Wool Week, so you'll get the chance to learn so much from him for yourself if you come to a future Wool Week.

There was one final event at the mart - the opportunity to buy fleeces from the fleece competition.  I'd obtained such lovely and interesting fleeces from the Fine Fleece Store at J&S on the Monday morning, that I'd not intended to purchase at this point..........  but then it turned out that the rather special black Championship fleece was actually for sale........  Tom and I decided to split it and buy it between us.  (you'll know Tom from Wovember)  Even half a Shetland fleece will go a long way for spinning lace yarn, and it was just too special to go to one person only.  So, actually, as I'm writing this I'm realising that my purchase of half of this fleece was a sacrificial and altruistic action on my part.  Well that's my story and I'm sticking to it! 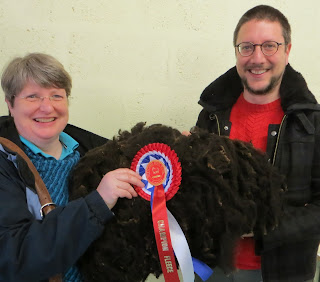 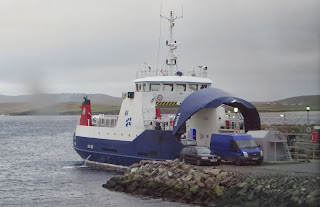 Sunday was a very early start to get to the coach before 7.30am, but everyone made it.  We were going north for the day.  This involved two ferries there and two ferries back.

The journey to Haroldswick in Unst, driving through Yell, took us over 2 hours, but we did make time for a stop at the famous Unst Bus Shelter.

I think we were all very moved when we heard that the theme for this year of Sheep and Wool was in honour of the North Atlantic Native Sheep and Wool Conference.  What a wonderful honour and welcome to us from the people of Unst. 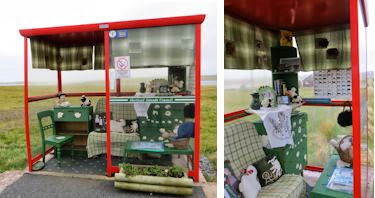 I see that Deb Robson has also blogged about the Unst Bus Shelter - you can see her actually knitting in the shelter here.

After being served the most amazing morning coffee/tea at Haroldswick Hall, accompanied by some seriously gorgeous home bakes, we drove on to Hermaness National Nature Reserve to meet some local crofters and their sheep. 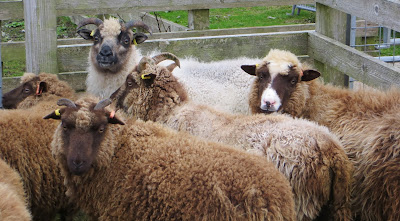 They had brought off the hills a selection of Shetland sheep just for us to see and penned them in groups of rams, ewes, and male & gimmer lambs/hoggs - I'm not sure if in Shetland they call their weaned youngsters of around 6 months of age hoggs or lambs.  Also, I realise I didn't look to check if the male hoggs/lambs were castrated or not - if castrated they'd be called wethers.
There is a useful list of sheep terminology here, and a more comprehensive but international one on Wiki here.

Anyway, not only had the crofters rounded up these hill sheep - no small task, but they'd separated them into male, female, boys and girls.  Again I felt very humbled to be welcomed so fabulously by the people of Unst.

Above is a pen of ewes, including a couple of very old, but very healthy looking ewes.  Below are two  of the sheep from other pens that caught my eye.

We were able to spend a good amount of time observing the Shetland sheep and talking to the crofters, and I also observed that there were some glorious examples of knitting being worn by members of the group, and I think possibly nålbinding in the second hat from the left. 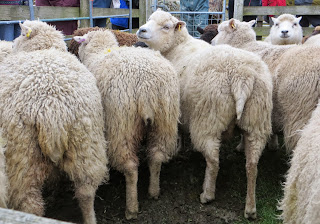 Here I got a very clear photo that shows the
characteristic tail that gives the North Atlantic
Short-Tailed group of sheep breeds their name. 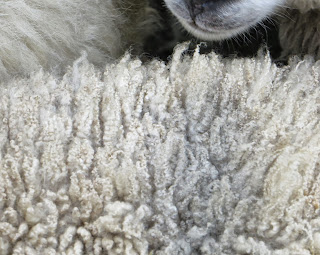 Again I was most interested to see the huge variation in the types of fleece on the sheep.

The crofters explained that some of the fleeces looked different because they had been rooed rather than shorn since those sheep had been shown earlier in the year.  Rooing gives a better look to the fleece on the sheep for the show ring. 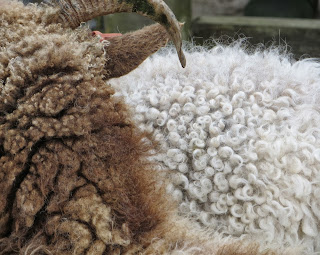 The other thing I learnt is that in Shetland sheep rooing is easier where the 'join' between the old fleece and the new growth is weakest and this is influenced by the sheep being not in the best condition at the end of winter.  It may be that there is a genetic influence on this as well.

Just before we left I couldn't resist this photo illustrating the story of Shetland wool from 'on the sheep' to finished Shetland wool hat - those of you with sharp eyes may spot that the person studying the sheep so intently is Deb Robson. 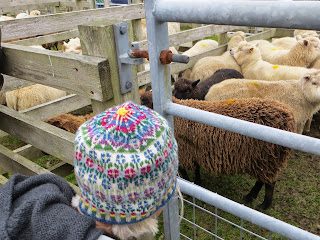 History of the Shetland Sheep
Shetland Sheep - A brief description
So we left Hermaness and drove back to Haroldswick through some stunning countryside. 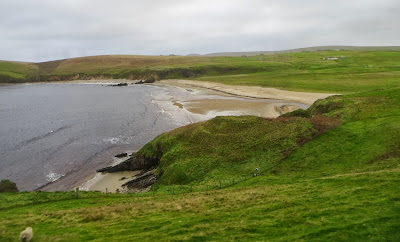 At the Hall we were met with the sight of a wonderful buffet lunch made especially for us - a real treat indeed and it was as delicious as it looks.

There was a craft fair on in the Hall as well, and musicians playing traditional Shetland music.  Many of us succumbed to temptation with the high standard of the different craft goods for sale. 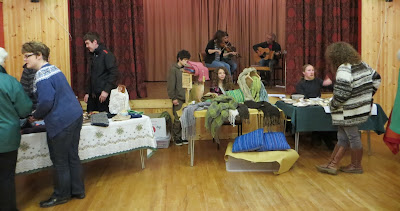 On the opposite side of the road to the Hall is Unst Heritage Centre, and the wonderful welcome for us extended there where there were knitters and spinners demonstrating their skills for us to see. 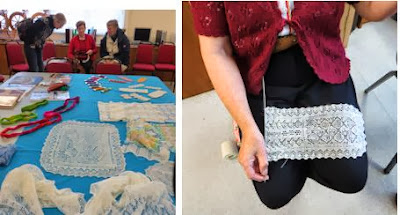 There is a fabulous display of historic lace knitting held at the centre, together with examples of the equipment used to spin and knit the famous Unst lace.  Another place that is firmly on my 'must-see' list of suggested places to visit in Shetland.

One of the exhibits at the Heritage Centre that I really enjoyed looking at were these sheep made by the local children.  I think crafts skills and creativity must run in the blood of these descendants of the lace knitters of Unst.

We then left Unst and went to Sellafirth Hall on Yell for afternoon tea and talks from Andy Ross and Liz Gott on the use of Shetland wool in local textile arts and crafts.  There were some lovely samples of weaving for us to look at.

We then had time to look round ASF Shetland, Shetland Gallery and Bayanne House - all the linked websites have great images of the art and crafts we were able to see.  Yell is another island where creativity flourishes!

Just as we were leaving I spotted two Shetland sheep standing on the top of a bank which had partly collapsed to reveal the rock and peat below.  A very fitting image for the end of an absolutely fantastic day. 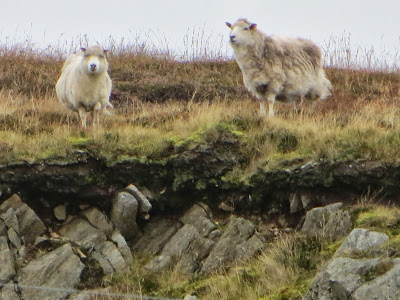 Jane
Orkney, United Kingdom
I live in Orkney where I farm Boreray sheep on a windy northern island with conditions very similar to St Kilda where Boreray sheep originated. I also enjoy knitting, spinning and weaving. 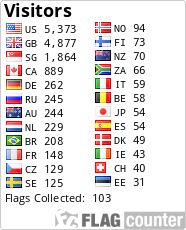